Setup iOS certificate handling for your Cordova app with Fastlane

On to the (usually) nasty stuff: Certificates and Provisioning Profiles for iOS.

The problem: certificates and provisioning profiles

If you already dabbled with Xcode manually you know there are a million ways certificates and provisioning profiles can go wrong.

They are cumbersome to create in the web UI that Apple offers, they are problematic to install, the configuration needed to make them work was changed 3 times already (pre Xcode 8, Xcode 8, since Xcode 9) and the error messages you get when something goes wrong often point to the wrong place. If you work in a team where test devices get added or removed frequently, you also have to redo and redownload the provisioning profiles quite often.

If you follow Apple’s documentation on Code-Signing exactly this tends to work - until it doesn’t.

When running a Fastlane lane this could look like this:

You really don’t want to spend time to debug and solve these.

Lucky for us Fastlane offers a nice solution that fully manages all the complexity and replaces it with one call in a lane: match.

From the beginning a big part of Fastlane was to help with the codesigning mess. The tools sigh and cert are a semi automated way to do that:

Later this was expanded into match, whose founding idea is described in the codesigning guide.

With match you store your private keys and certificates in a git repo to sync them across machines.

Unless you absolutely you can’t revoke your existing certificates and profiles (which is necessary to use match) you should definitely use match to solve this once and for all:

Initialize match by running fastlane match init manually on the command line. This wants a private (!) git repo you have access to where it can save the created things: 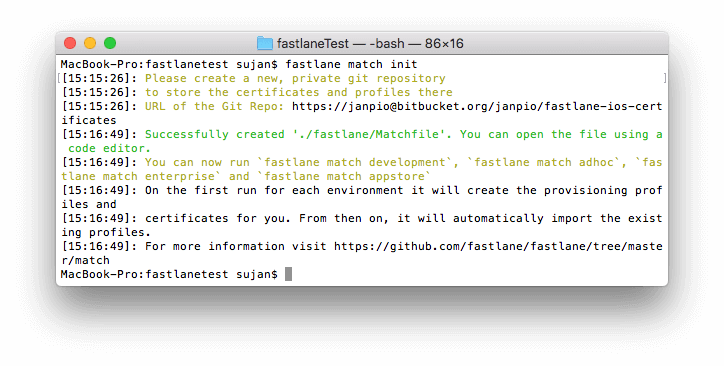 When this command was successful, it also creates a Matchfile in your project’s /fastlane folder that contains this git URL:

If you used your Apple developer account before to develop apps, fastlane match nuke development/distribution can get rid of all the certificates and profiles already present in your account. You want to do that so match can start with a clean slate. 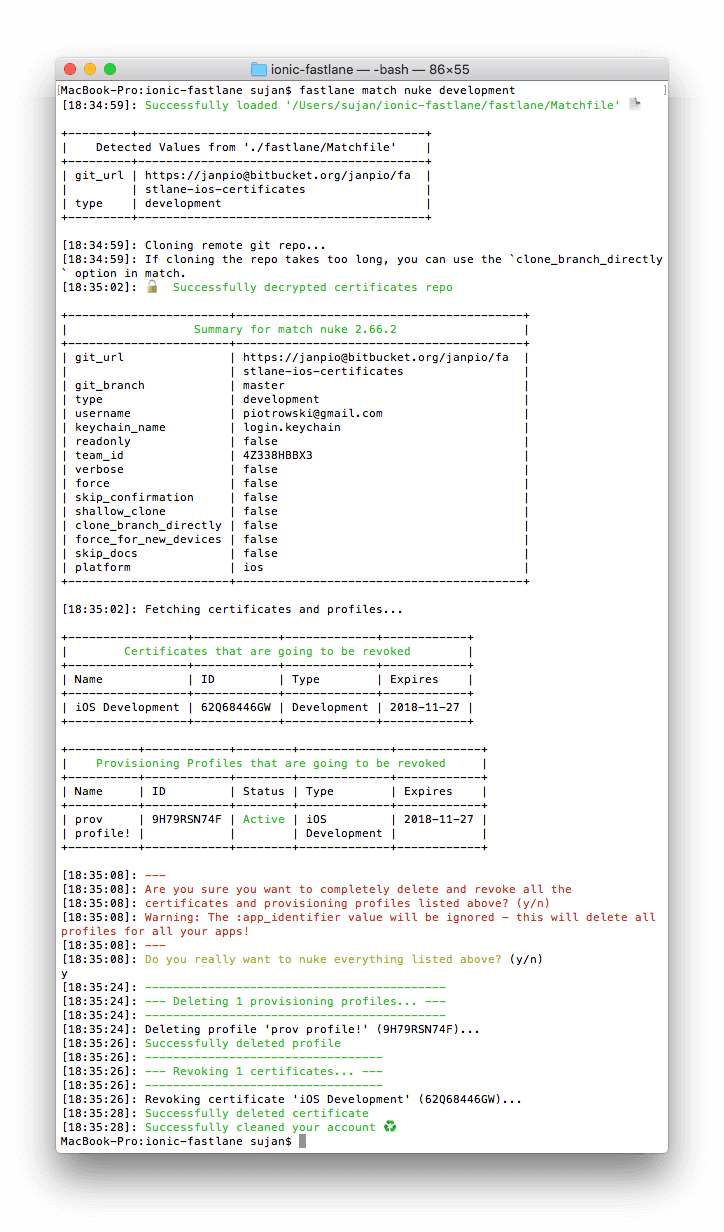 Check before and after in your Apple Developer console to see if it worked. (You will also get a scary sounding “Your Certificate Has Been Revoked” email(s) from Apple.)

Don’t worry, apps signed with the old certificates won’t stop working and the next builds with these certificates will update just fine. (Note that if your colleagues are using the same certificates, definitely talk to them then before running any command like this or they might be very unhappy.)

match itself then can create brand new certificates and provisioning profiles in your account and commit them to the Git repo you provided earlier.

You can do this by explicitly running fastlane match development or fastlane match appstore in the command line, or by just adding match to one for your existing lanes or a new lane: 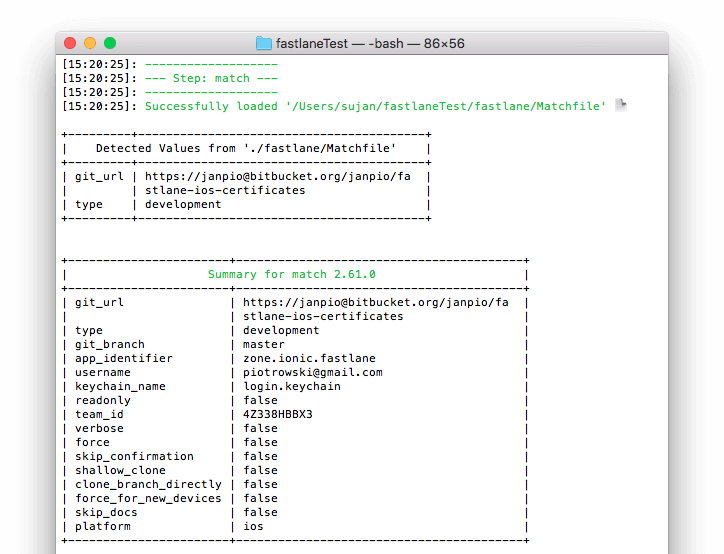 It will first clone your certificates repo specified in Matchfile, decrypt its content (if present) with your passphrase and check if the certificates are still valid by logging into your Developer Portal account (might require two factor authentication!).

If there are no certificates for the project you are currently working on it will create them in the Developer Portal, then download and install them locally in your Mac’s keychain. After encrypting them (and asking for your new passphrase if this is a new repository!) it will push them to your certificates git repository for future usage: 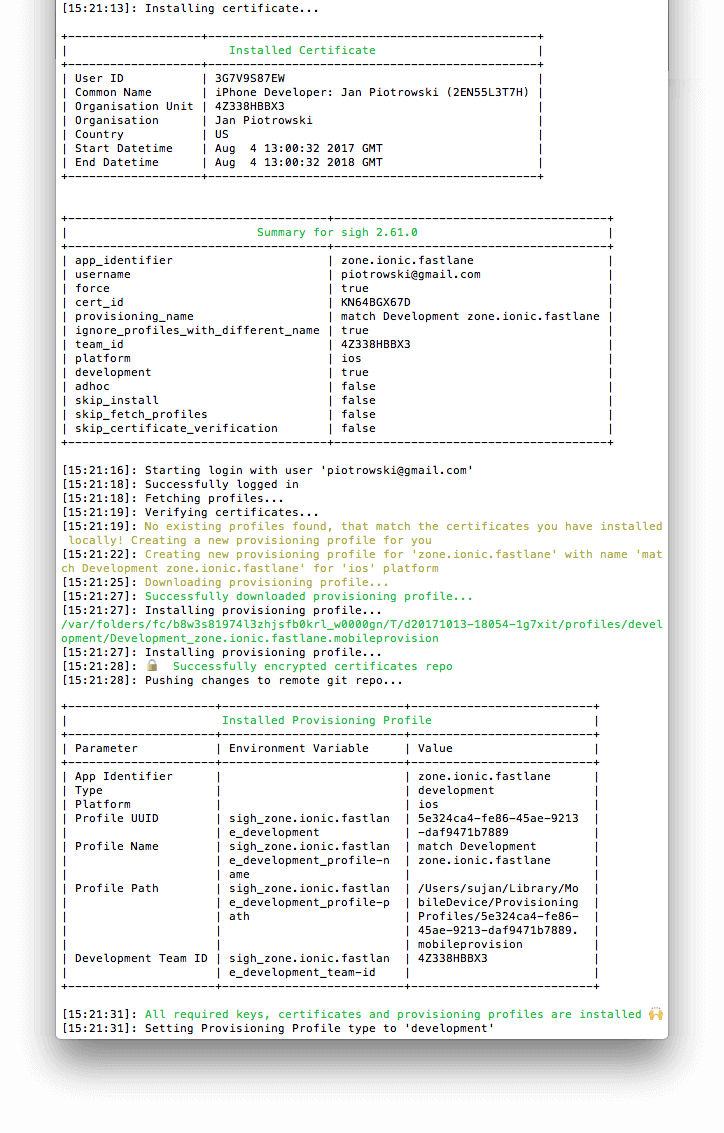 If the certificates already exist in the repo, they are downloaded and installed locally before the lane continues.

Use certificates in normal lanes with match

Now you can use these certificates in your normal build processes.

Most fastlane iOS “build” actions and plugins will automatically pick up the correct certificate values (paths, IDs, signature) if you run a simple match first (fastlane-plugin-ionic and gym definitely do!). This makes sure the certificates are definitely there and installed properly.

There are several tasks that can become necessary in your daily life with certificates and provisioning profiles:

When you add a new device’s UDID in the “All Devices” list in Apple’s Developer Portal, you have to invalidate your old and create new development or ad-hoc provisioning profiles that include this device.

You can do so with fastlane match on the command line by simply calling:

Change encryption password of your your in Git repository

You might want to change the password used to secure your profiles and certificates in your Git repository.