After preparing your Ionic Cordova projects you can now install Fastlane on your machine and initialize it for both your iOS and Android projects.

Note: Unfortunately Fastlane can only be installed on Mac OS and Linux systems as some of its internal dependencies depend on functionality, that is not available for Windows (yet). Bummer. Are you using Windows and really interested in using Fastlane? Click here to learn more.

The work of Fastlane is done by a CLI tool (unsurprisingly) called fastlane:

fastlane can be conveniently installed using “Homebrew” (If you dont have Homebrew yet, follow it’s installation instructions on brew.sh): brew cask install fastlane 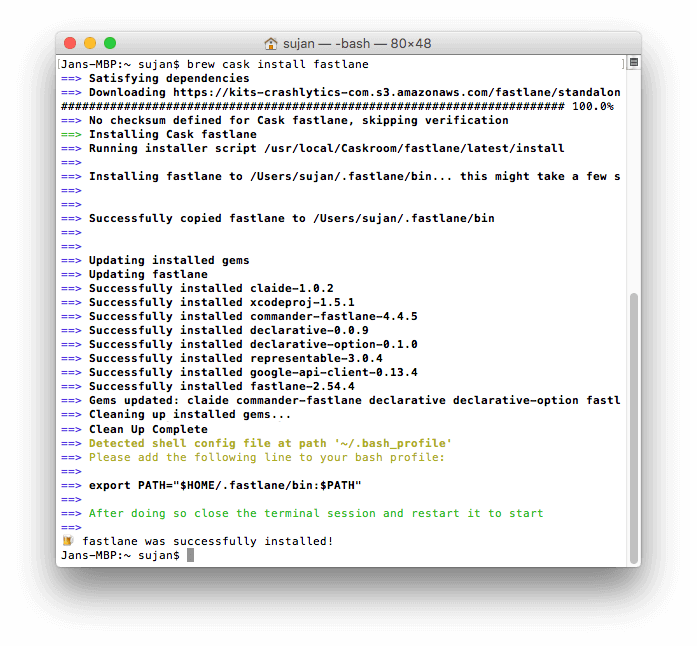 It downloads and then installs fastlane to /Users/username/.fastlane/. It also installs some gems, you maybe can derive that one is for manipulating .xcodeproj files and one for interacting with Google APIs.

After adding Fastlane to your path in .bash_profile (see output of the previous command), restart your terminal and execute fastlane --version to confirm the working installation:

(If this doesn’t work as described for your local setup and environment you might want to have a look at the official fastlane documentation which offers alternative installation methods.)

Now that the fastlane CLI is installed and working, you can continue to initialize Fastlane in your project.